Lately it seems like everything is a mess.  Cases in point:

It’s not even worth cataloguing the array of lesser offenses (potty-related; 4-am-waking related; isolation-related).  But my feelings were summed up nicely when I tried to check out books at the library and the computer told me, as gently as possible, that I had unresolved issues.  And would I please see the librarian. Honey, I wanted to say, I may need more than a librarian.  A bartender, for instance.

I’m one of those people who has a hard time getting rid of things most of the time, because I’m inclined to imagine other uses for it.  T-shirts, for example, are CERTAIN to become t-shirt yarn and then fabulous folksy rugs, except that they are all different weights and textures and none of them is a color I’m crazy about.  But I have to store them for a couple of years before I can arrive at this conclusion and give them away.  It’s an imperfect system, but I really excel at it.

So imagine my husband’s surprise when he entered the kitchen yesterday afternoon to find me packing Bonne Maman jars into a big cardboard box.  It’s our preferred jam, and we eat a lot of jam, and when we realized a few years ago that the jars were useful for everything from packing kids’ lunches to serving gin and tonic, well, we kept a few.  Ah-hem.  They overflowed the glass-cabinet, and then we started storing them on the windowsill by the food-prep area, because it was so convenient for lunch-packing.  At first it was one row, then a second on top, and then a third, in a truly precarious and often artistic display.  A few weeks ago, our boys decided to stop eating our packed lunches on the two days a week they go to daycare, preferring to eat what everyone else eats (daycare makes fresh lunches for the kids every day).  And here we are with seven thousand jars and no concrete use for them.  But then I remembered some friends who may want to borrow them for glasses at their August wedding on the coast, and then I got to thinking about everything else you can do with them.  So here’s my list.  Pinterest style.  Be inspired.  Or entirely turned off this blog.  It’s up to you.

A whole bunch of things you can do with Bonne Maman jam jars:

Or, as my husband points out, you could conceivably just recycle them.  If you were cold of heart and dead of spirit.

If you’ve never watched the movie “Center Stage,” you should.  It’s cheesy and beautiful and uplifting and all the right people get what they deserve.  It’s a dance movie that functions perfectly as a metaphor for life: dance the dance you have inside you, with all the effort and discipline you can muster.  And recognize when you’re trying to dance a dance that’s not your own.  And of course, roses and standing ovations follow immediately when you have the wisdom to be yourself.

But here’s where I’d add a few things: it’s not just about wisdom.  It’s just as much about opportunity, and foresight, and connections, and plain old good luck.  It’s about having sufficient freedom from constraints that you can actually DO the kinds of movement your own self demands.  And for most of us, absent full-time child-care and a perennially healthy bank balance, we just don’t get that freedom.  So what do we do?

I hate that all the best answers seem to revolve around “patience” and “self-love” and being “mindful.”  We need an Action Plan.  A Career-Planning Mom action figure.  She’d be a myth, like all the other super-heroes, but she’d have her s*#t together.  Perhaps I need a costume.

I’ve been tired a lot today, and I was trying to decide why.  Was it:

a) the three days I’ve been solo-parenting two sick kids?

b) the inordinate amounts of prep I’m trying to squeeze in for this new course I’m teaching?

c) the fact that I, too, am probably coming down with this obnoxious cold?

or e) the fact that Len is back in the state and therefore my systemic adrenaline levels are dropping as I anticipate succor and rest?

Yeah, all of the above.  Nothing dramatic here, just ordinary life, but boy can it wail on you when it wants to.

Today featured some fabulous new snot-stains on the couch; a respectable number of poops in the potty, much admired by all and handled by none; an over-the-shoulder broccoli-tossing event at dinner; two miserable, overtired boys who refused to sit in the tub and were instead rinsed as they stood sobbing, huddled together.  There was one hearty shove onto the tiled floor; one mighty swat to the face (resulting in glasses needing repair before future wearing); a wide range of kicking-type strategies implemented with varying degrees of subtlety.  There was a whole lot of nursing; some experimentation with cheap plastic lacrosse sets; one illicit sprint across a newly-refinished deck.  There were many conversations with a contractor: why does yellow, even a yellow I love, make me feel oppressed in my kitchen?  It’s like forced cheerfulness.  Screw that.  There was one conversation with a pre-school teacher: it’s not just at home that E sets EVERY ANIMAL IN 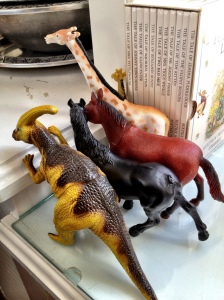 Animals on the move. As usual.

THE ROOM in a massive herd, facing the same direction, like some kind of exodus.  We all chuckle and reflect upon the fine line between obsessive tendency and full-blown neurosis.  There was one article proposal accepted; one complex childcare-during-brother’s-surgery strategy worked out; many bills paid.  Non-stop nose-wiping.  It was, in short, a day.

And how was yours?

We are who we are. This is me: parent, partner, intellectual, grower, maker, wonderer. Wanderer, too, I suppose.