This feels like the core of what I’m about, the seeds in the forbidden fruit.  Surely I’m not the only one who felt like the only ways of knowing that were privileged were intellectual (preferably with big names and degrees attached)?   My whole life I thought that music and dance were my only outlets, not that there’s anything wrong with those.  But to realize in my mid-thirties that I am absolutely crazy about yarn and textiles…well, that just seems strange.  And happy.  Plus, having kids made me draw AND gave me to understand that some folks don’t give a crap if your cow looks like a hippo or, say, a badger with ticks.  As long as it’s PURPLE.  That’s a mode of living and making I can get behind.

Making stuff is the bottom line of human endeavor, right?  First we make words, then we make stories, then we make fire and art and cuisine and crafts.  (Correct me if my chronology is a little off.)  But that’s one reason I think it matters who makes our stuff, and how their lives are.  It matters that we’re having these massive revolutions all over the world in craftsmanship, food production, bartering. Because after all, this is how we relate to one another, how we understand and express who we might actually be.  Thank god I had kids, or I’d still be thinking it was all gravy.

This page may end up being kind of a listing of projects I’ve made or am working on…I suppose some will get posted if they’re works in progress, but I wanted to offer some resources and maybe even a little inspiration on this static page.

Fierce lion roaring from his stable. Like they do.

The stable above was made from a cereal box according to Joel’s simple directions, and it’s remarkably sturdy.  As is evident from its fortitude under lion assault.

2. Amanda Blake Soule’s work, both at her blog (though I can’t read it that often because all the serenity and productivity make my teeth hurt) and in her books.  I’ve recently made some sweet hats from her pattern (well, sort of; I modified it) in Handmade Home.  I like her take on fabrics and textiles — the old, old view that these things are precious, and so we make them well and buy good ones and reuse them as much as we can: dress to child’s dress to doll or handkerchief or dishrag or quilt.

Baby blanket I made for a friend’s new small 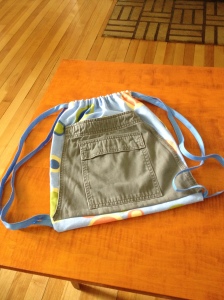 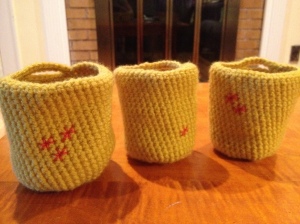 Crocheted hanging baskets, with embroidered stars, I made for a niece’s college dorm

We are who we are. This is me: parent, partner, intellectual, grower, maker, wonderer. Wanderer, too, I suppose.